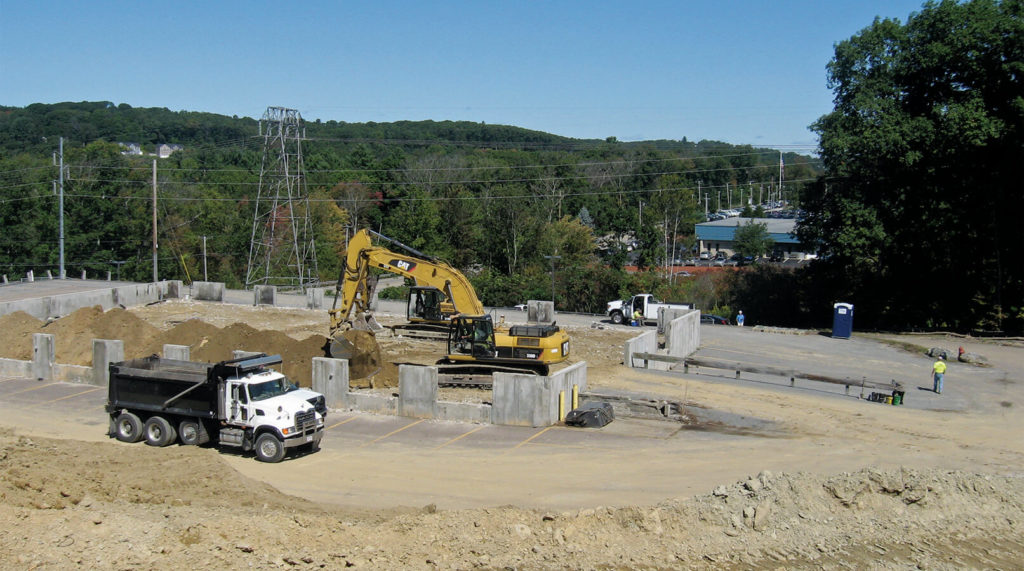 As seen in the November 2019 issue of New England Construction

A $5.5 million Mazda Auto Dealership is under construction in Auburn, Massachusetts, as a design-build project. One family-owned engineering/construction organization is serving all functions of the contract, including project management, general contractor, civil engineering, and site development and construction. Based in Leominster, Massachusetts, McCarty Companies, comprising McCarty Engineering and McCarty Associates, is building the 22,000-square-foot Mazda dealership for Patrick Motors Inc., likewise a family-owned company, and an established business in Greater Worcester for some 50 years.

Located on a 5.6-acre tract adjacent to U.S. Route 20 (Washington Street), the Mazda dealership building has a design modeled on the standards developed for Mazda’s Retail Evolution program. Mazda has been providing details of the new design to dealers since 2015, with Evolution stores being constructed all across the U.S. The Auburn store will be among the very latest to sport the new design.

According to Mazda, the floor plan of Retail Evolution is meant to be an open concept with a gallery-type look. It will feature creative backdrops to showcase vehicles, with extensive use of glass for a transparent view into the dealership operations. Located within the building is a Customer Lounge, offering a beverage counter, comfortable seats, free Wi-Fi, mobile device and electric-vehicle charging station, as well as other amenities. Both the showroom and lounge of the new stores are finished in genuine wood and metal materials.

McCarty started construction at the site in May with Matty Arya serving as Project Manager. The Project Superintendent is Mark Masciangioli. Overall project responsibility lies with President Patrick McCarty, a registered professional engineer. McCarty’s Site Division is performing all site work, while McCarty Engineering has provided site design and permitting.

Following tree clearing and stump removal, the contractor began excavation during the last week of August. Portions of the existing building’s floor elevation and parking area are between 6 and 10 feet higher than the elevations of the new building and its parking areas. While others demolished the existing building’s superstructure, McCarty is responsible for demolishing and removing its concrete foundation. In addition, McCarty must remove all site improvements for the existing building including water, sewer, drainage, paving, and retaining walls, among others. The deepest excavation at the project is approximately 10 feet. McCarty fielded a large fleet of Caterpillar heavy equipment to expedite the project. (See sidebar list)

As part of this phase of the project, the contractor is excavating and exporting 10,000 cubic yards of loam topsoil, and 65,000 cubic yards of common fill. The existing soil is primarily glacial till, and ledge has not been encountered as of this report. Excavated material left on site will be crushed and screened to 3-inch minus, mixed with virgin material, and reused as pavement subbase. Material processing will be accomplished using a Metsos Locotrak mobile processing plant that has processed material at other McCarty job sites in the past.

Site work includes the construction of 10,000sf of precast concrete block retaining walls provided by Shea Concrete Products. Furthermore, new water, sewer, and electric services, new asphalt pavement for sales, service, and new/pre-owned vehicles, plus new site lighting, and landscaping, are all required under the contract. McCarty anticipates having to remove some ledge at the site but will use a heavy-duty hydraulic hammer to break up the ledge instead of drilling and blasting the material.

Pipe Plus is providing water and sewer pipe for the project. McCarty crews are installing a precast concrete pump station and 1,100 feet of SDR21 PVC plastic force main pipe to connect the new building with the town sewer system at a higher elevation. The force main alignment has to be carefully executed to avoid conflicting with existing drainage structures. In addition, the contractor is installing 200 feet of cement-lined 8-inch ductile iron water main to join the town’s water distribution system.

The contractor has to construct an extensive stormwater drainage system. This involves installing about 25 precast concrete drainage manholes, drainage catch basins, and several miscellaneous structures, all supplied by Shea Concrete Products, and two Stormtech drainage infiltration chamber systems. Each assembled Stormtech system consists of 169, 3-foot-tall polypropylene corrugated wall chambers that capture stormwater and allow it to filter down through the soil. The systems will be installed by McCarty workers beneath the surface of the project’s two parking lots. They are installed with 6 inches of cover stone and 6 inches of base stone and require a 40 percent stone void. Each chamber system covers a total area of 6,083 square feet, and after being backfilled, will be paved over by subcontractor, A.F. Amorello & Sons of Worcester. Amorello is installing about 16,000 square yards of bituminous concrete pavement over the project’s two parking lots and the 640-foot, 24- to 26-feet-wide entrance roadway.

The $5.5 million Patrick Mazda dealership is scheduled for completion in October 2020, making it one of the newest Mazda Retail Evolution stores in New England.